For those of you outside Oz, If you’re not familiar with the term “budgie smuggler”, strip off, put on a tight pair of Speedos and  look in the mirror; you’ll get the picture. Girls, I’m sure you can use your imagination. If not, let these guys help you.

Some well-worn budgies turned out to take part too. Budgie Bolt ambassador Greg ‘Marto’ Martin from Triple M’s Grill Team got back-waxed and spray-tanned especially for the occasion.

“Aged care is no place for a young person – the average age is 83 and life expectancy is just three years. It’s very much geared for a person who is nearing the end of their life, not at people who are just starting,” Marto said.

Right now, 7,500 young Australians with high care needs live in aged care homes because alternatives are limited. (National disability agreement 2010) Marto said that while he appreciates it’s an uncomfortable feeling stripping down to budgie smugglers in public, it’s not as uncomfortable as being a young person in aged care.

But there were no signs of any red faces among the 250 competitors on Friday evening. The brave bolters were a sight for tourist’s eyes as they took off laughing from South Bank at beer-o-clock on a five kilometre loop passing through some of Brisbane’s busiest bar-filled districts.

They’re off giggling and jiggling

Although the fastest bolter came in with the least humiliation at 15 minutes thirty-three seconds, Marto’s team had different tactics for hiding their tackle.

Pick your place in the crowd,” said GPS rugby player, Kevin Bracken. “And keep the good looking girls in front,” added workmate Rob Johnson.”Eyes up,” quipped Marto as I tried to focus the photo.

Last year, Young care opened apartments on the gold coast and announced a $3.2  million apartment project in Sydney to house some of the young people needing 24/7 care but many more need your help. Budgie bolt donations will be open for a few more weeks here and you can find out how to support Young Care  here

Fair play to all who took part. 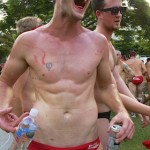 Why I gave up my career to travel round-the-world
Deeper Travel: The Enchantment of Carnarvon Gorge

Tackling the ups of the extended 35.1km ‘downhil

Cruising one of the iconic bridges on the Thredbo

Not sure whether I’m chasing or escaping the imp