I’m a bit impulsive and sometimes I agree to challenges or just dive in without thinking them through.

Metaphorically speaking, I like to push myself to the edge. Occasionally I throw caution to the wind and jump off it. Paul, my hubby, is the pragmatic planner who thinks about the soft landing for me, or turns up mid air with a spare parachute and asks me if I forgot something.

I don’t remember exactly when I agreed to cycle the 900 kilometre Mawson Trail with our hardcore tour cycling friends, but somewhere between a bottle of plonk and oblivion I faintly remember slurring “Letzzz do it”.

The off road track, named after the Antarctic explorer, Douglas Mawson, starts in the South Australian outback where the rugged flinders ranges first sparked Mawson’s fascination for exploration.

It’s known as one of Australia’s great bike adventures and it’s my most ambitious arthritic bike venture yet.

With no towns or settlement of any description on the first two days of the trail, there will be no softie option for me to wimp out.

We’ll have to be self sufficient with tent, spare parts, food, water  emergency comms and compression bandages in case our slithery friends decide to snack on us.

While Paul takes care of the real stuff, I’m already dreaming of the time changed landscapes and the divine vineyards of the Claire and Barossa Valleys where we’ll sink a few of South Australia’s finest.

It’s set for September and the training starts now. While i’m not new to cycling, it’s going to take some time to get my scrapheap spine used to the day after day off-road grind. My only taster of multi-day cycling was a few days dabbling in Tasmania. It was a slackers supported version and a mere toe dip compared to the two-week off-road challenge of the mighty Mawson.

Paul’s on a research and recce mission of mountain bike trailers, water filters and the best air mattress available on the planet. It looks like another ass-saving soft landing is already in the planning for yours truly. 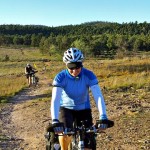 9 Responses to A Bike Adventure Challenge

Just don’t say this enough. I love you Sydney. Y

Australia has a lot of wide open spaces. Good to g

Yes.. my coconuts are lovely .. thank you. #Cheeky